Looking back at DEMETER activities in 2022 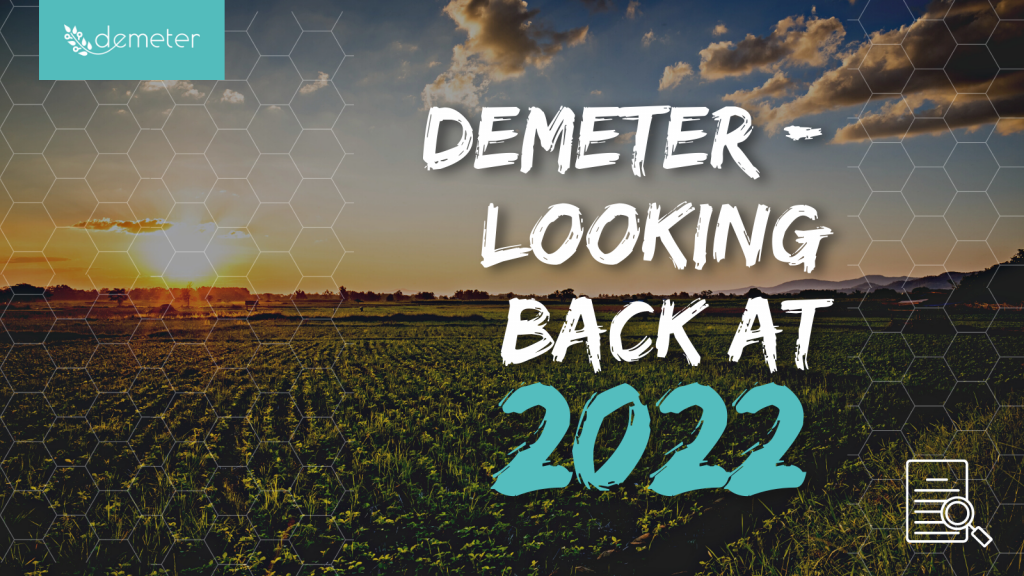 DEMETER’s goal is to lead the digital transformation of Europe’s agri-food sector through the rapid adoption of advanced IoT technologies, data science and smart farming, ensuring its long-term viability and sustainability.  We focus on interoperability as the main digital enabler. As DEMETER enters its final year, we look at back at 2022 and some of the key highlights. There are many to choose from, so below is a short snapshot!

2022 started with a focus on our Open Call #2, DEPLOY. The Open Call aimed to increase the outreach of the DEMETER value proposition by funding small consortia of 2-3 partners for the deployment of new, high-value pilots in the agri-food sector. On January 11th, we held an information webinar for potential applicants explaining the call and the application process. We also wrote blog posts on ‘User Journey Mapping’ and how we foster interoperability between DEMETER and AFARCLOUD. Work continued in the pilot projects and in the development of the Agriculture Information Model (AIM), the Stakeholder Open Collaboration Space (SOCS) and the DEMETER Enabler Hub (DEH).

In February, the deadline for Open Call #2 passed and 60 applications were received. Working with SmartAgriHubs we ran a really interesting webinar ‘The Changing Face of Agriculture’ where we discussed the need to attract more young farmers and female farmers to the sector and how digitisation could help. We heard from farmers about their experiences and also from advisors, digital innovation hubs and farmers’ organisations on the supports available. In addition, DEMETER partners exhibited at the Food for Future Summit and expo in Dubai. The results of the DEMETER Farmer Voice survey on the barriers and drivers to technology adoption were shared in March at a webinar. We had almost 500 responses with the key results shared at the event. We also had two speaker panels, addressing some of the key insights unveiled. The first panel discussed how we can build the right environment for technology adoption, overcoming issues such as cost, data issues, training, education and return on investment. This panel included farmers, farmers’ associations, and technology companies. The second panel featuring farmers and sustainability experts discussed how smart technology can help address environmental, economic, and social sustainability. A new blog post “Fostering interoperability solutions among multiple individual platforms & solutions’ was featured on the website, discussing how DEMETER can be seen as a data/service intermediary and a suitable real-world testbed for an agriculture data space.

Across April, we presented at the COPA COGECA workshop alongside other R&I Horizon2020 projects in the agrifood sector. We also presented at the AIOTI webinar on the ‘Role of IoT in addressing the agroecological focus of the EU Green Deal’.  We saw a great blog post from the Georgian Farmers Association as they shared with us some of their initiatives to support women in agriculture. They are actively involved in many capacity-building activities and the overall support of women farmers and entrepreneurs. The article ‘Evaluating the Single-Shot MultiBox Detector & YOLO Deep Learning Models for the Detection of Tomatoes in a Greenhouse” developed under DEMETER was selected as an Editor’s Choice Article in Sensor MDPI. We launched a white paper about the DEMETER Stakeholder Open Collaboration Space (SOCS) which detailed the overall SOCS objectives and the design process.

In May, we saw a new DEMETER publication’ Building an interoperable space for smart agriculture’ in Digital Communications and Networks. We presented at the H2020 AURORAL conference on European Regions Summit for Smart Communities. We held an internal workshop with the NIVA project to share information on the projects, the architecture and the pilot projects. Our billboard prize for winning an EU web award went on display in Brussels airport. We had our first face-to-face meeting in two years in June. It was great to be back in Brussels, at the same table, discussing the progress of DEMETER and planning the next years’ activities. The World Farmers’ Organisation held their General Assembly in Budapest, and we had the opportunity to exhibit and participate in the panel discussions. We were heavily involved in the IoT Week 2022 in Dublin, with an exhibition stand and also organising and participating in several sessions. For example, we presented the DEMETER Agriculture Information Model (AIM) and how it supports semantic interoperability and also discussed the challenges in creating a common European data space for agriculture. We also presented at the FarmConnect Romanian Agriculture Fair and at DataWeek 2022. Finally, we held a webinar to showcase our Open Call #1 winners and how they integrated within DEMETER.

July saw the launch of ‘The Farmer’s Voice’ report sharing the results of our survey regarding the barriers and drivers to Smart Farming Technology adoption. We also shared our July newsletter with a round up of news from the project. Researchers from DEMETER attended IGARSS22 – the International Geoscience and Remote Sensing Symposium. In Ireland, we had an opportunity to meet with the Minister of State at the Department of Agriculture, Food and the Marine and share information about DEMETER. We also continued our discussions with other H2020 projects where a joint communication strategy was debated among other dissemination synergies.

During August, we had several researchers present at the IEEE COINS conference in Spain. We launched the ‘For Farmers’ section of our website. One of our Open Call #1 winners published a paper ‘AgriChain: Blockchain Syntactic and Semantic Validation for Reducing Information Asymmetry In AgriFood’ on their involvement in DEMETER. Work continued on our pilots – for example, in our pilot focused on ‘Proactive Milk Quality Control’ the data collection phase of milk samples finished, moving on to lab work and then data analysis. Our five Open Call #2 winners presented their work in addressing several farming challenges – water saving & soil protection, finding the optimal time to harvest, managing electricity costs, reducing pesticide usage and promoting the sustainable use of herbicides.

After the summer break, events were back in full force in September. In Montenegro, we presented at the Days of Science and Innovation and at a local wine fair. We contributed an article to the SmartAgriHubs (SAH) newsletter on gender equality, a topic that DEMETER is actively involved in promoting. We were also heavily involved in the SAH final event in Lisbon with several workshops, presentations and exhibitions. We promoted our work on AIM and the aim to establish the basis of a common agricultural data space to enable the interoperation of different systems. The results of the DEMETER Farmer Voice survey were presented at a webinar organised by the Romanian Research Institute of Crop Protection. We exhibited at the World and National Ploughing Championships in Ireland and presented at the FIWARE Global Summit in Gran Canaria. Work was also ongoing in the new pilot projects from our Open Call winners. For example, IoT devices and sensors were deployed by winner, HEMS, to provide farmers with more insights for a more sustainable and responsible use of herbicides.

In October, as with all months, work continued on the pilot projects. For example, in our pilot Pest Management Control on the Fruit Fly, the prototype of the automatic trap and automatic photo recognition system were tested in the lab. Partners, Milanovic Winery, discuss their experience of being involved in DEMETER and using weather stations, smart pheromone traps and devices for measuring air temperature and humidity in the wine cellars. The Georgian Farmers’ Association organised a farm walk to the farm involved in the DEMETER pilot. Local farmers were introduced to smart sensors and their role in pest and irrigation management. We also arranged the SmartAgri session at the Digital Around the World Conference with a panel discussion around the use of data in agriculture. The October edition of our newsletter was released giving an update on the technical aspects of DEMETER, case studies of the DEH and pilot updates.

November was a busy month with lots of dissemination and communication opportunities. We were active at Interpom in Belgium and also spoke at the ‘Digital Twins and Standards’ session at the European Big Data Value Forum. This session reported on the results from integration of Big Data & AI technologies into Digital Twins and the relationship to standardisation activities. We were also presented at Villaggio Coldiretti, an exhibition organised in several Italian towns. The World Farmers’ Organisation brought DEMETER to Egypt and to the COP27 summit, sharing activities on many of our pilot projects that aim to increase agricultural sustainability.

Finally, in December our newsletter focused on data from several different perspectives. In particular, we looked at our approach towards an interoperability space. We discussed the need for transparency for data in the agriculture supply chain and also heard from a farmer participating in DEMETER on their view of data. We published a new paper in the Journal of Networking and Network Applications on Qualitative parameter analysis for Botrytis cinerea forecast modelling using #IoT #sensor networks. We held several internal workshops to plan the work ahead for 2023.

2023 promises to be a productive year for DEMETER and the consortium of sixty partners look forward to bringing our vision to fruition.