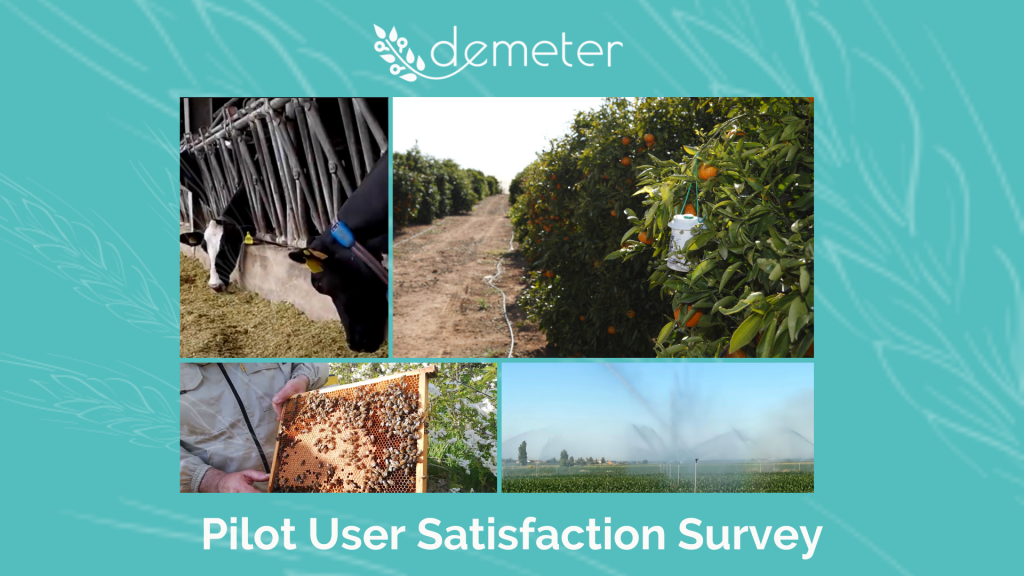 The DEMETER Pilot User Satisfaction Survey was conducted at the end of April 2022 for assessing pilot round 1 from the pilot farmers’ perspective. The survey was directed at the end-users of the products/solutions that are built in the course of each of DEMETER’s 20 pilot projects. In this way, response data from 86 pilot farmers was collected. The 20-min survey included various rating and open questions to evaluate the pilot solutions in terms of their usefulness, ease of use, perceived interoperability, barriers to their long-term adoption, practical application, user experience, and economic value.

The results are indeed very promising, revealing the success and value for the end-users of the majority of the DEMETER pilot projects at this stage, while also identifying various areas for improvement. Negative ratings and comments regarding the pilot solutions by the participating farmers were very rare. Each of the 20 DEMETER pilots, of course, offers different technology and has to deal with different conditions, which makes the results only to a certain extent generalisable. This broad spread of pilots was implemented by design in DEMETER, as we wanted to ensure our technical solutions were applicable across multiple agricultural contexts. Pilots were provided with their individual results as end-users’ feedback. Negative ratings and comments highlight areas for improvement, whereas positive ones show the pilot developers where they do things right. Moreover, the average ratings per pilot rely on differing numbers of farmers, as the DEMETER pilots vary in size. Therefore, the ratings presented here were calculated by averaging the mean values per pilot.

Generally speaking, aspects of usefulness (e.g., “The pilot’s product/solution meets my needs.”) and ease of use (e.g., “The pilot’s product/solution is easy to use for me.”) were perceived to be in the medium to high range (i.e., participants rated their agreement with the statements with 3.5-4 out of 5). When asked for personal benefits compared to existing solutions, responses were positive overall, for example, “saves time, everything is in one place, I do not have to look for more advanced tasks and analyses elsewhere” and “help in making decisions, saving time, possibility of comparison”. Generally, participants also noted very few features of the pilots’ solution/product that were too complex to understand for the farm’s personnel. Also, interoperability does not seem to constitute an issue for farmers, especially in terms of the potential use of mobile devices to access the pilot application. At the same time, the perceived interoperability of the pilot application with existing solutions and machines on the farm shows potential to be improved in pilot round 2 so that the average rating across the pilots can fully reach the 4-point mark. This is to be expected, as development of interoperability mechanisms is a central tenet in the DEMETER project.

The most relevant barrier that would hinder the adoption of the pilot’s solution after the finalisation of DEMETER is by far the expected cost of the solutions, with on average 34% of a pilot’s farmers selecting this option, followed by concerns about return on investment for shared data (28% per pilot). Other relevant barriers – although to a lesser extent – are farmers’ concerns that they do not have the time to thoroughly learn to use the pilot’s solution (17% per pilot), misgivings in terms of the farm being too small (14%), and data privacy concerns in general (13%). Pilot developers are thus encouraged to provide clarification on those pilot farmers’ concerns. The other 7 included barriers were all selected by less than 10% per pilot on average.

In terms of use and application, the pilot solutions tend to retain or even support participants’ autonomy (“By using the pilot’s product/solution, I still have the feeling that I am in charge of my farm operation.”) and competence (“I feel confident using the pilot’s product/solution.”) as farmers and users of the developed digital tools, according to their ratings. The results suggest that for some pilot farmers, it may not be entirely clear which data is being collected by the pilot’s product/solution and who has access to it (i.e., average rating of 3.6 out of 5), which indicates room for optimisation in terms of creating even more transparency during the next pilot round. This is an interesting aspect since it very much reflects thinking across the EU in relation to putting data in the control of the farmer and highlighting the potential value therein.

Asked about the pilot’s perceived economic value, the pilot farmers do agree that the new solutions increase their productivity and profits as well as decrease costs. Response texts were rather diverse, for example “it will keep me from making mistakes” or “Less chemicals products and yield losses” for profit increase and “remote control will reduce the number of necessary trips, time and fuel consumption” and “higher animal health and fewer casualties” for cost reduction. In pilot round 2, farmers should be even more clear about this aspect so that average ratings across pilots would expectedly rise up to the 4-point mark.

Finally, the overall rated likelihood to recommend was ca. 7.4 out of 10, which can be considered a very satisfying result for pilot round 1. Two thirds of the participating pilots showed average ratings of 7 or more out of 10; and there were very few low scores (5 or below). Nevertheless, the pilots with ratings between 5 and 7 are encouraged to work on the demonstration of their products’ benefits to the farmers, the importance of that being also revealed by the DEMETER external farmer survey conducted in DEMETER in 2021. The likelihood of adopting the pilot’s solution after the finalisation of DEMETER was rated similarly high, albeit with higher variability (both more high and more low ratings). Another reason for some of the lower ratings here is that the pilot solution “is not finalized” but commonly expected to be prospectively successful, as, in the words of a pilot farmer, “you can always trust DEMETER”. Again, this demonstrates the DEMETER pilot projects’ value for the end-users and bodes well for their future success. All pilot projects were provided with the complete feedback from their farmers, which was reported to be helpful for further optimisation, now at the onset of pilot round 2.