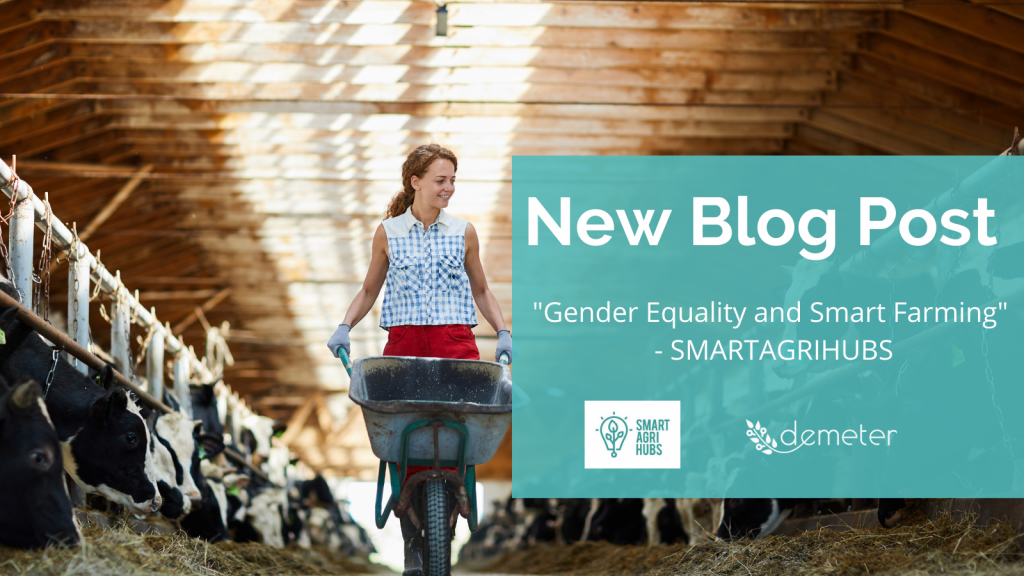 The raison d’être of SmartAgriHubs is inclusive and exponential Agri-digital community and network building, showcasing Agri-digital innovation which leads to more sustainable and competitive European agriculture.

While many achievements are evident, a bit of self-reflection prompted a question: In our quest for inclusiveness and innovation, had we overlooked the obvious?  What about women in agri-tech and their underutilized wealth of knowledge and capacity?

On the premise that change begins from within, the project management teams of IoF2020 and SAH set up a Gender Task Force with two connected teams of communications and analysis. Some preliminary internal analysis was carried out in both projects. We found some uncomfortable truths. Only 14% of project coordinators were women within IoF2020.

Research teams in SAH consisted of 25% women. In total, women represented 21% in Use Cases and 32% in Innovation Experiments. All this, although both project teams include women and men committed to gender balance.   Clearly, this is not an isolated or new issue. The Commission’s study ‘Women in the digital age’ and the ‘Women in Digital initiative’ found that few women participate in the digital sector. Only 24 out of every 1000 female tertiary graduates have an ICT related subject, of which only six go on to work in the digital sector.

This number is decreasing compared to 2011, so we cannot argue that time will deal with this issue. However, this study also found that if more women were to enter the digital jobs market, it could create an annual EUR 16 billion GDP boost for the European economy. McKinsey estimated a global amount of 12 trillion. Other studies have found that companies with gender balanced boards demonstrate better decision-making and that companies with more women in management have better financial performance.

To start change, raising awareness about gender equality in the agricultural, agri-food and agri-tech sector became crucial. There are specific challenges attached to these industries, and we aim at supporting collaborations across Europe. 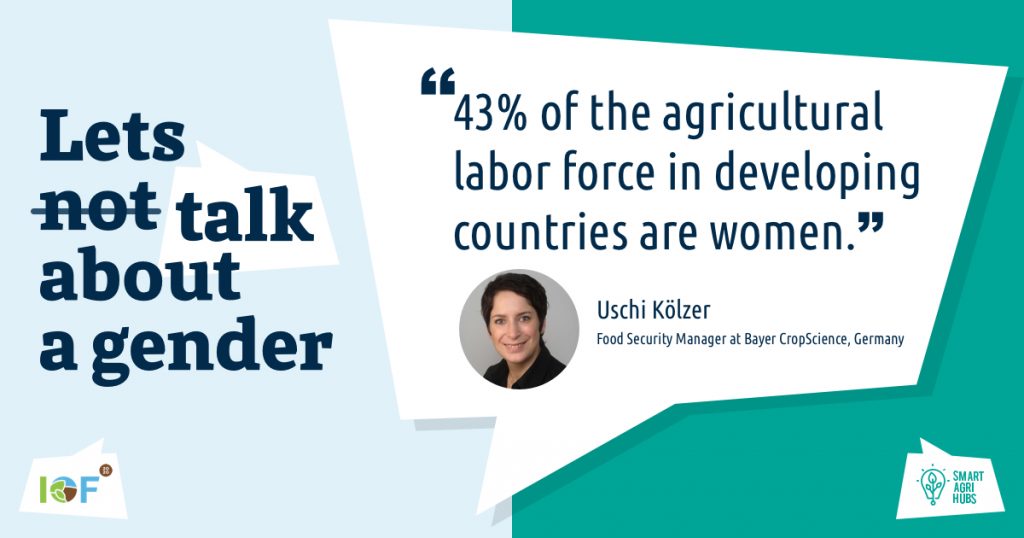 On this basis, the Gender Task Force launched its first “Gender Equality Week” from 26 to 30 October 2020. This Gender Equality Week was simultaneous with the first ever European Parliament #EPGenderWeek, launched at the initiative of the FEMM Committee. It included a social media campaign, the release of podcast testimonials and a “gender equality toolbox” with practical guidelines on how to use gender-neutral vocabulary in meetings. At the end of this first “Gender Equality Week”, a call was launch for “Gender Ambassador”: men and women working in the agricultural, agri-food and agri-tech sector were encouraged to contact the Gender Task Force to take on an active role in promoting gender equality.

This first campaign was well received and has since been transformed in a recurring social media campaign: #GenderFriday. On Friday, social media posts referring to gender equality in the agri-tech, tech and agricultural sectors are shared on the SmartAgriHubs social media channels. 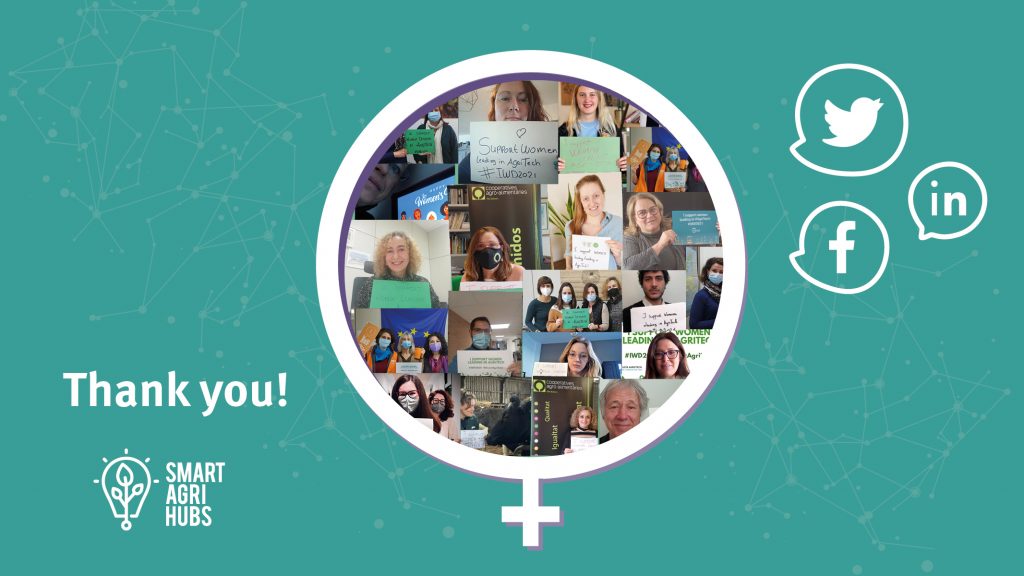 For the 2021 edition of the International Women’s Day, the social media campaign “I support women leading in agritech” was launched. The campaign was first announced via a #GenderFriday post on 5 March. Members of the SmartAgriHubs and IoF2020 networks were encouraged to show their support by sharing a selfie on their social media channels, using the #IWD2021 hashtags and tagging the organisations. The campaign was a success, with the participation of members across Europe.

During the IoF2020 Final event on 17 March, the closing plenary was dedicated to “Gender Inclusiveness in Agritech”. This plenary closed a day dedicated to “Impact and lessons learned on IoT deployment”. The session was chaired by Jovana Vlaskalin and Dr Cynthia Giagnocavo, with a panel composed of Doris Marquardt from the European Commission, Doris Letina from CEJA, Ntuthu Mbiko-Motshegoa from the South African farmer community and Antonella di Tonno of an Italian agricultural cooperative exchanged. Within the session, the panellists discussed European policy, agriculture, farmers’ initiatives, and the next steps in improving gender-balance.

If IoF2020 has now ended, SmartAgriHubs is continuing its efforts in promoting gender equality and now carries the torch of the Gender Task Force.

In its July 2021 newsletter, SmartAgriHubs has announced the launch an online survey: “Challenges and best practices across the European agri-tech ecosystem”. The SmartAgriHubs Gender Task Force is looking forward to bringing its work to the next level by collecting data about gender balance in the agri-food and agri-tech sectors. The survey is open to all participants. With your participation in this survey, we can get a better sense of challenges and best practices across our European agri-tech ecosystem.

SmartAgriHubs will end in 2022. We hope that the legacy of the Gender Task Force will be continued. Until then, more activities are to come!