An update on the Agriculture Information Model

The DEMETER Agriculture Information Model (AIM) is a data model and ontology that describes all data needed by DEMETER applications and the usage of which ensures semantic interoperability between data and various components. AIM provides the common data model (language) that allows different, existing (or new) systems and devices to talk to each other and interoperate as part of a complete app. This provides a number of business opportunities to create new apps from existing data, components, and devices (or even existing systems), thus allowing the monetization and reuse of the data and devices.

The core meta-model, the cross-domain ontology, the domain-specific ontologies, and the metadata schema are all interconnected layers in AIM. This architecture enables among others: 1) straight-forward interoperability with existing models by reusing available (well-scoped) concepts and terms in the modules, instead of defining new terms, whenever possible, 2) easy mapping/alignment with other existing models, by module instead of the entire model, 3) easy extension of the domain/areas covered in AIM with additional modules being added as necessary, 4) easy extension of the domain model, by modifying only specific modules and 5) easy mapping to top-level/cross-domain ontologies. 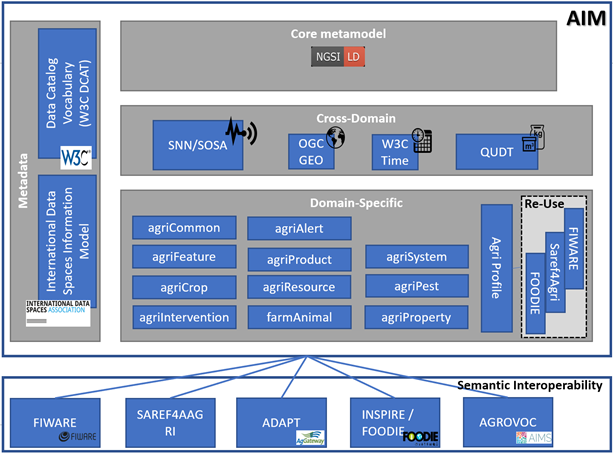 The DEMETER AIM presents several advantages and innovations. The most important aspect is that it enables interoperability with the best-known existing ontologies and systems. Apart from the mappings mentioned previously in the cross-domain ontology of AIM, there are also semantic mappings of AIM to FIWARE, SAREF4AGRI, ADAPT, INSPIRE/FOODIE, AGROVOC and the EPPO2 modelling approach. There are also some additional mappings planned to be integrated into AIM for its final release. The architecture of the AIM provides the model with scalability in the sense that both the layering and the modules themselves facilitate updates and new additions to the model in an easy straightforward manner. In addition, AIM is openly accessible to all interested parties through the Open Geospatial Consortium (OGC) and the LIRMM AgroPortal repository.

All 20 DEMETER pilots successfully use AIM, and the extensive feedback gathered from round one of pilot execution has been used to extend and enhance the model with new semantic mappings and new concepts. Based on external parties’ feedback in addition to internal evaluations, AIM is considered to have strong standardisation potential and we are currently focusing on promoting this via standardisation channels.

The evolution of the DEMETER pilots, as well as the incorporation of various tools and enablers, naturally resulted in the identification of additional concepts that needed representation in the AIM model, as well as necessary revisions to existing model elements, requirements to ensure model completeness, efficiency, and semantic interoperability. The use of questionnaires, the creation of an issue tracker to track changes to the AIM model, and direct input from technical work package developers and partners all aided in identifying the needs of the pilots. As a result, the pilot-specific ontologies layer was introduced in the second AIM release, which builds on and extends the domain-specific ontologies and aims to capture and add concepts and terms to AIM that are useful for specific pilots. This layer contains ten ontologies that are tailored to the needs of pilots.